Tunis (AFP) - 16:54 GMT - AFP IS CLOSING THIS LIVE REPORT on the attack on Tunisia's national museum in which at least 19 people were killed. We leave you with a brief round-up of events:

- The militants, dressed in military uniforms, opened fire, killing 17 foreign tourists including Polish, Italian, German and Spanish nationals. A Tunisian national and a police officer were also reported dead while 38 others were wounded.

- Two gunmen were later killed, bringing the siege to an end, authorities said. There was no immediate claim of responsibility for the attack.

- The assault appears to be the worst on foreigners in Tunisia since an Al-Qaeda suicide bombing on a synagogue killed 14 Germans, two French and five Tunisians on the island of Djerba in 2002.

16:54 GMT - Accomplices - Tunisian authorities are hunting for two or three potential accomplices to the attack, the prime minister says. Two gunmen who carried out the attack on the Bardo Museum were killed in a police assault but their accomplices may be at large, he indicated.

"There is a possibility, but it is not certain, that (the two gunmen) could have been helped... and we are currently conducting extensive search operations to identify the two or three terrorists who possibly participated in the operation," says Prime Minister Habib Essid. 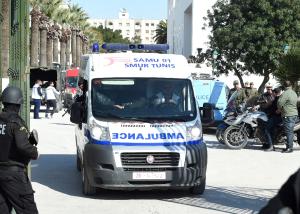 "But we must not let this blow affect us -- and I am sure that the world will retain its confidence in us," he adds.

16:29 GMT - Anti-terror laws - Next door, in parliament, there was "enormous" panic as shots rang out, Tunisia lawmaker Sayida Ounissi says on Twitter. She says the gunfire occurred as members of the justice ministry, judiciary and armed forces gathered to discuss new anti-terror laws.

16:21 GMT - Witness account - An employee of the Bardo Museum, visibly panicked, describes her ordeal as she heard "intensive firing" at around midday when the shooting broke out. "My colleagues yelled: 'run, run, there are gunshots'," Dhouha Belhaj Alaya tells AFP. "We fled by the back door with some colleagues and tourists."

16:12 GMT - President - Visiting victims of the museum attack in a Tunis hospital, President Beji Caid Essebi tells reporters: "The authorities have taken all measures to ensure that such things don't happen again."

16:06 GMT - Worst since 2002 - The attack appears to be the worst on foreigners in Tunisia since an Al-Qaeda suicide bombing on a synagogue killed 14 Germans, two French and five Tunisians on the island of Djerba in 2002, AFP's Ines Bel Aiba reports. 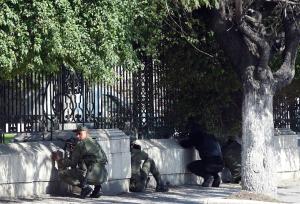 Security forces on the streets of Tunis (AFP Photo/Fethi Belaid)

There was no immediate claim of responsibility for today's attack but Tunisia -- the birthplace of the Arab Spring revolutionary movement -- has struggled to tackle a rise in attacks from Islamist extremists.

- No claim of responsibility -

15:52 GMT - 38 wounded - Prime Minister Essid signals that the attackers, who he says were dressed in military uniforms, opened fire on tourists as they were getting off a bus, then hunted others down inside. 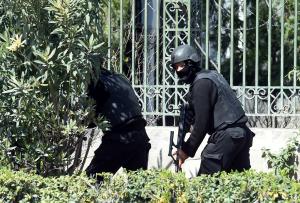 "My deepest sympathies to families of victims of Bardo museum attacks. EU stands united w [HASHTAG]#Tunisia[/HASHTAG] against extremism," he tweets.

15:45 GMT - French FM - "Attack in [HASHTAG]#Tunisia[/HASHTAG]: Today [HASHTAG]#terrorism[/HASHTAG] has struck - and this is not by chance - a country that represents hope in the Arab world @LaurentFabius," says a tweet from the French Ministry of Foreign Affairs and International Development.

15:39 GMT - Parliament lockdown - Lawmakers were reportedly discussing a new anti-terror law at the time of the attack on the Bardo Museum, which is adjacent to Tunisia's parliament building.

Earlier, a Tunisian MP told AFP that the parliament had been evacuated and all work suspended. A picture posted on Twitter by journalist @christinepetre appears to show parliamentarians in lockdown after gunmen stormed the museum.

He told reporters that they were among 19 people who died in the assault. 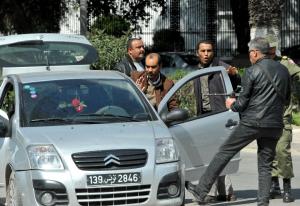 15:24 GMT - Italian deaths - An official at the Italian foreign ministry in Rome says two Italians were wounded in the Tunis attack. About another 100 Italians were in the area and had been taken to safety by Tunisian police, authorities add.

15:03 GMT - Siege ends - Members of Tunisia's special forces are seen by AFP journalists raising their fists in the air as a sign of victory, as the siege comes to an end with the killing of two gunmen.

Television footage earlier showed dozens of people, under the protection of heavily armed security forces, running for safety. Authorities have still given no clear indication of the total number of hostages taken as Tunisia's Prime Minister raises the death toll to 17. 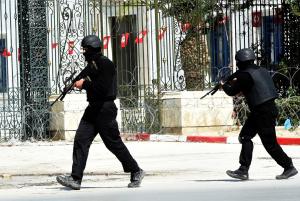 14:57 GMT - ATTACK IN TUNISIA OVER, ALL TOURISTS EVACUATED FROM MUSEUM: STATE TV

14:44 GMT - European casualties - Media reports suggest that among those killed are British, French Spanish and Italian nationals, though AFP has yet to confirm the nationalities.

Johannes Hahn, Commissioner for European Neighbourhood Policy and Enlargement Negotiations, tweets: "Deeply shocked by attack in [HASHTAG]#Tunis[/HASHTAG] earlier today: Tunisians + Europeans killed and injured. My condolences to the families of the victims".

14:30 GMT - Gunmen killed - Two armed men responsible for the attack on the Bardo Museum have been killed along with a police officer, according to Tunisia's state television. The report did not say whether the attack was over.

"A policeman and two terrorists were killed," Wataniya 1 television reported. A police source confirmed the death of the policeman to AFP. 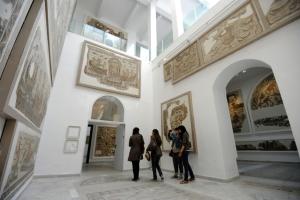 14:07 GMT - Hollande - French President Francois Hollande voices his country's "solidarity" with Tunisia after at least seven foreigners and a Tunisian national were killed in the brazen day-time attack.

In a brief call with his Tunisian counterpart Beji Caid Essebsi, Hollande expressed "the solidarity of France with... the Tunisian people in this very grave moment," a source close to Hollande's office said. 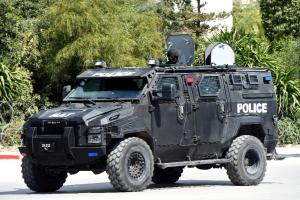 14:04 GMT - Polish wounded - Marcin Wojciechowski, a spokesman for Poland's Foreign Ministry, announces on Twitter that three Polish people have been injured in the assault.

13:58 GMT - Valls comments - French Prime Minister Manuel Valls confirms hostages have been taken in a "terrorist" attack on the museum in Tunis. Speaking in Brussels, he says: "I condemn this terrorist attack in the strongest terms. There has been a hostage-taking, without doubt tourists have been affected, killed."

13:54 GMT - Museum - Tunisia is trying to rebuild its once-burgeoning tourism industry, which is struggling to recover from the effects of the 2011 revolution.

The Bardo Museum, renowned for its exceptional collection of ancient mosaics, is a significant draw and opened a new wing in 2012 following a major facelift.

It boasts objects from prehistory, the Phoenician period and Punic and Numidian times, as well as Roman, Christian and Islamic artifacts. 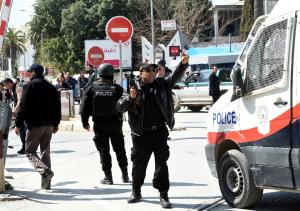 13:52 GMT - Radicalisation - Tunisia is fighting against the radicalisation of Muslim youth, with authorities saying as many as 3,000 Tunisians have gone to Iraq and Syria to fight in jihadist ranks, including the Islamic State group.

An Islamist lawmaker, Monia Brahim, tells AFP the gunfire prompted parliamentary committees to suspend their meetings as lawmakers were ordered to assemble in the main chamber.

13:46 GMT - Extremism - Tunisia has seen a rise in Islamist extremism since the revolution that ousted veteran strongman Zine El Abidine Ben Ali in 2011.

An army offensive against jihadists liked to Al-Qaeda in the Islamic Maghreb has been under way in the remote Mount Chaambi range near the Algerian border since 2012.

13:42 GMT - British response - Britain's Foreign Office says: "At the moment we are not confirming any British involvement" in the Tunis attack.

Prime Minister Habib Essid is meeting with the interior and defence ministers.

13:29 GMT - Hostages? - The spokesman refuses to confirm reports of a hostage-taking inside the museum but says there is information that tourists are still inside.

"Anti-terrorist units have entered the museum," he says, adding that the surrounding area has been cordoned off.

"There are eight victims" including "seven foreigners", Aroui says, adding that about 100 tourists were inside the museum at the time of the attack.

"The majority of tourists were evacuated," he says.

13:17 GMT - WELCOME TO AFP'S LIVE REPORT on an attack on a museum in Tunis that has left seven foreigners and a Tunisian dead.

The interior ministry says "two or more terrorists armed with Kalashnikovs" carried out the attack at the famed Bardo National Museum.

Staff Member
Thank you Chad for this report

So many souls going to a lost eternity.

We have the coming of the Lord to look forward to.
But O Lord I need so much more compassion for the lost in this world