The Book of Daniel Ten Horns of The FOURTH BEAST ROME : THE SPIRIT OF ANTICHRIST RISING IN POWER

Tags
the book of daniel the fourth beast the little horn

100 million saints were slaughtered by the antichrist power come in full filling the true antichrist king the beast king of Rome, The Papacy.

All the Emperors of Rome combined never could never achieve the depths of blasphemy and evil of the beast king Papacy.

I will simply show you how The prophecy Daniel received from God telling of The FOURTH AND LAST BEAST, DESCRIBED THE rise TO POWER of the spirit of antichrist in the ROMAN EMPIRE.

The Book of Daniel Ten Horns of The FOURTH BEAST ROME : THE SPIRIT OF ANTICHRIST RISING IN POWER |
L

1In the first year of Belshazzar king of Babylon Daniel had a dream and visions ….

7After this I saw in the night visions, and behold a fourth beast, dreadful and terrible, and strong exceedingly; and it had great iron teeth: it devoured and brake in pieces, and stamped the residue with the feet of it: and it was diverse from all the beasts that were before it; and it had ten horns. 8I considered the horns, and, behold, there came up among them another little horn, before whom there were three of the first horns plucked up by the roots: and, behold, in this horn were eyes like the eyes of man, and a mouth speaking great things.

and it was diverse from all the beasts that were before it; and it had ten horns.

THE TEN HORNS ARE TEN KINGS THAT ARISE FROM THE FOURTH BEAST
WHICH IS ROME
24And the ten horns out of this kingdom are ten kings that shall arise:
Daniel 7:24 The ten horns are ten kings who will come from this kingdom. After them another king will arise, different from the earlier ones; he will subdue three kings. 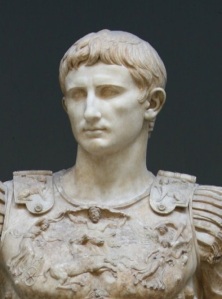 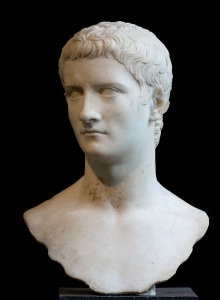 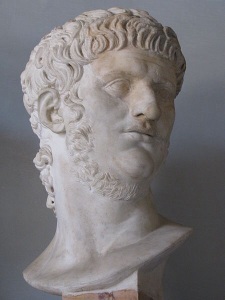 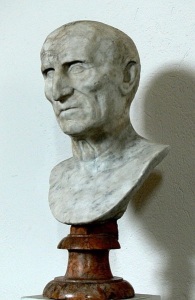 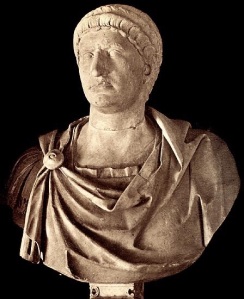 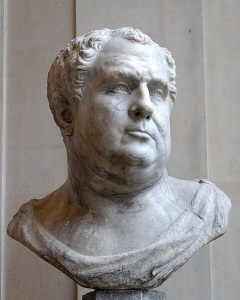 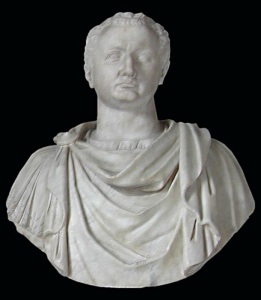 10: Titus
TITVS FLAVIVS CAESAR VESPASIANVS AVGVSTVS
June 24, 79 AD – September 13, 81 AD
Destroyed Jerusalem and its temple 70 ad
HE WAS ONE OF THE PEOPLE OF THE RULER TO COME WHICH IS THE BEAST KING WHICH COMES AFTER THE LITTLE HORN AND IS OF THE LITTLE HORN

The End of the Ten Horns

His eyes were large, but his sight was somewhat dim.

THREE OF THE HORNS WERE UPROOTED BEFORE HIM

Domitian played a significant role in the wars of succession, fighting as a general in the battles which led to the overthrow of Galba, Otho and Vitellius.
Domitian did help uproot the three horns.
The uprooting of the three led to Domitian eventually taking the throne of Rome. Three of the first horns were uprooted before him.
A Beastly Encounter: Prophecies in Daniel Chapter Seven, by John M. Oakes | Evidence for Christianity

21I beheld, and the same horn made war with the saints, and prevailed against them;
Daniel 7 KJV

First widespread official Universal persecution of christians by law was under Domitian:

“The destruction of any of the line of David”

“That no Christian, once brought before the tribunal, should be exempted from punishment without renouncing his religion.”

“when any Christians were brought before the magistrates, a test oath was proposed, when, if they refused to take it, death was pronounced against them; and if they confessed themselves Christians, the sentence was the same. ”

Christians were also given an extra tax under his rule.

Changed the roman calendar to name himself in it

renaming the month of September to Germanicus to commemorate his supposed military victories, and renaming October to Domitianus was a constant reminder to the rest of Rome that the eternal city was not a veiled Republic but truly was an empire at the whims of a single man.

Domitian also angered the Senate by his self appointment as perpetual censor. With that power he had complete privilege and authority to alter the Senate roles as he saw fit. He used that power to appoint several (up to 24) eastern new-men who as non Italians were clearly not welcome additions by their Senatorial brothers.

Domitian was the first emperor to have himself officially titled in Rome as “God the Lord.” He insisted that other people hail his greatness with acclamations like “Lord of the earth,” “Invincible,” “Glory,” “Holy,” and “Thou Alone.”

SO WE SEE THE RISE OF THE SPIRIT OF ANTICHRIST BEING SHOWN AS ASCENDING IN THE LITTLE HORN WHO WAS THE ONE RULING IN JOHN’S DAY.

Emperor Domitian, the self-proclaimed “Lord and God” and ruthless dictator, reigned from AD 81 to 96. st John was in exile of the Island of Patmos due to Emperor Domitian’s persecution. while there, John received the visions from Jesus that make up the words of the book of the Revelation of Jesus Christ.
The King and I: The Apostle John and Emperor Domitian, Part 1

St John takes up where The Prophet Daniel left off.
Concerning that Fourth Beast ( ROME) and its future as the little Horn (strength) of Antichrist growing and coming power in the world.

And here is the mind which hath wisdom. The seven heads are seven mountains, on which the woman sitteth.
10And there are seven kings: five are fallen, and one is,
Revelation 17 KJV

One is;
this was the Emperor Domitian; the little horn.

and the other is not yet come; and when he cometh, he must continue a short space. 11And the beast that was, and is not, even he is the eighth, and is of the seven, and goeth into perdition.
Revelation 17:10 They are also seven kings. Five have fallen, one is, the other has not yet come; but when he does come, he must remain for only a little while.

St John was given the prophecy of the book of the revelation of Jesus Christ, which expands on this Fourth Beast and This little horn, that is depicted as being full of the antichrist Spirit and so persecuting the saints’ blasphemously opposed to God will on earth and killing his people.

And there are seven kings: five are fallen, and one is, and the other is not yet come; and when he cometh, he must continue a short space. 11And the beast that was, and is not, even he is the eighth, and is of the seven, and goeth into perdition.

The Eighth comes after ALL the seven
Yet is Of Them.

1: By showing one king of the seven ruled in the time john lived.

2: by showing all the seven heads had names of blasphemy
ALL HAD THE TITLE ONLY JESUS IS ALLOWED TO HAVE;
PONTIFF MAXIMUS.

3: by showing that the 8th king IS UNIQUE ( because it alone is named as the beast king) AND SO WAS unique yet IS of the seven kings.

Daniel tells us the persecuting power of antichrist of the little horn Will be destroyed but only when the kingdom comes in full at the return of jesus christ.

26But the judgment shall sit, and they shall take away his dominion, to consume and to destroy it unto the end. 27And the kingdom and dominion, and the greatness of the kingdom under the whole heaven, shall be given to the people of the saints of the most High, whose kingdom is an everlasting kingdom, and all dominions shall serve and obey him.
Daniel 7 KJV

And as history shows us, with the rise of the beast king Came untold persecution on a scale never seen under the Roman Emperors

100 million saints were slaughtered by the antichrist power come in full filling the true antichrist king the beast king of Rome, The Papacy.

All the Emperors of Rome combined never could never achieve the depths of blasphemy and evil of the beast king Papacy.

To learn about the Beast King The High priest of Rome
Go here
The book of revelation: The Beast King Pontiff of Rome |

John arrived on Patmos under the last king Daniel had spoken of.
God made sure his Prophetic word concerning Rome as antichrist opposing All Gods People
Would be clear, and he left the remainder of the Prophetic words about ROME to John , who himself suffered under that little horns evil against God's people. yet John was not to merely repeat what Daniel had been shown, but He was given revelation to expand and show more to the church, what this spirit of antichrist would do in the world through ROME.

I believe it is the same John
Who was the beloved disciple
And wrote this as wrote revelation.
And what he writes here is key.
And in the book of revelation he was shown the Rise of the actual antichrist, and his false church.
Horrible To see it knowing how big It is, And so how many souls it deceived and still to this day deceives, but sadly true.
Yet all things are possible with God, who said come out of her my people.

Daniel again talked of Rome being the interpretation of the kings dream
And Daniel says
' And in the days of these kings,
Which means those ten kings of that fourth beast Rome
Which is described as the legs and feet of the statue.
And indeed Jesus Christ came in the days of those ten kings ( see first post)
And Jesus came announcing the kingdom of Heaven.
Just as the prophetic dream foretold.

40And the fourth kingdom shall be strong as iron: forasmuch as iron breaketh in pieces and subdueth all things: and as iron that breaketh all these, shall it break in pieces and bruise. 41And whereas thou sawest the feet and toes, part of potters' clay, and part of iron, the kingdom shall be divided; but there shall be in it of the strength of the iron, forasmuch as thou sawest the iron mixed with miry clay. 42And as the toes of the feet were part of iron, and part of clay, so the kingdom shall be partly strong, and partly broken. 43And whereas thou sawest iron mixed with miry clay, they shall mingle themselves with the seed of men: but they shall not cleave one to another, even as iron is not mixed with clay.

44And in the days of these kings shall the God of heaven set up a kingdom, which shall never be destroyed: and the kingdom shall not be left to other people, but it shall break in pieces and consume all these kingdoms, and it shall stand for ever. 45Forasmuch as thou sawest that the stone was cut out of the mountain without hands, and that it brake in pieces the iron, the brass, the clay, the silver, and the gold; the great God hath made known to the king what shall come to pass hereafter: and the dream is certain, and the interpretation thereof sure.
You must log in or register to reply here.
Similar threads