So this is kinda a joke but kinda not
(So at the end of reading this the question is would this be unethical?)


When it comes to politics we are all aware of the corruption and problems that follow.

The congress and other legislative bodies at the state and municipal levels are heavily influenced my big companies and special interest groups. Scandals come out regarding misconduct while in office that also weaken the public's trust in the system.

So, what if we had the government ran by computers, LOL? So instead of congress making laws we would have a super computer that would make the laws, run the courts, as well as robotic police officers.


******Executive Branch(Enforce the laws)********
No more issues of racial profiling with police officers unless the software is programmed in such a way that if you are looking for a suspect of a particular race( a crime was just committed) it would consider that. No more police misconduct (over here officers have been charged with sexually assaulting women, shooting handcuffed suspects, etc). A computer officer would not have any fear. Humans officers often discharge their armaments in the absence of a threat but because of fear. They see a sudden moment and freak out. A computer could read body language millions of times a second and not need to shoot until it was very certian there was danger. It could afford to wait that long because the reaction time would be very fast.

******Judicial system (Interpret the laws)*******
With the court system the computer program would be kinda like WATSON, the computer from IBM that played jeopardy. The attorneys would present their case as before and the voice recognition software for the computer would take the audio and translate it to data. As with IBM's WATSON did, the computer would analyze millions of case records in a nano-second, weigh the evidence, have 100% knowledge of the law and render a verdict. Not only would the computer have instant access to
all the laws, it would also have records of all previous cases of a similar nature. It would know how the verdict was rendered previously, what percentage of certain cases were appealed and when appealed, the percentage that was overturned. We would leave the supreme courts to humans.

******Legislative (make the laws)******
With the enactment of federal statues, state laws, and city ordinances, with the law making super computers we would still have a referendum process by which the voters can override a decision of the computer and the computer would be programmed to accept the fact.

And instead of elections to elect new human leaders, the elections would be to vote on new patches. The various parities(Democrats, Independents, Republican, Green, etc) would have various software patches for the supercomputer every election cycle and the voters would vote on the patches that they wanted not a candidate.

So for example if the system is too strict a the liberals may have a patch that allows it to put more weight on t the citizens desires. Or if it is too flexible the conservatives might have a patch to make it more in adherence to the laws and give less leniency.People would write letters to their local supercomputer for their states, kinda like how we write our congress person who than advocates on our behalf in Washington, D.C. or at the state assembly. Likewise the computer would read the data and compile all the request from citizens determining the needs and what possible laws to enact that do not conflict with existing laws, unless the need is so great then existing laws would be changed to enact the new laws.

***********
Of course this is not perfect as only God is. Computers a susceptible to viruses, being hacked, as well as power disruption issues, etc. But is it perfect now with humans?

But overall do you think this will be better for our country?? Maybe I spent too much time thinking about this, lOL.

Would this be unethical?
I'm not saying I am in favor, just trying to pick your brain.

Interesting to ponder, but then what would the lobbyists do? How would politicians get rich at "public service"?. It sounds a little scary to me on the legislative powers. My thinking is that because the conservatives and progressives are so far apart on anything we should stop fighting and split the country in two where one country can be ruled by conservatives and the other by progressives. Make new constitutions for each.

The Union and the Confederacy, or North and South, or Liberals and Progressives with the Independents getting Alaska, Hawaii, and the island territories.

Then they would go to war with each other (North vs South) and one would win and conquer the other and then it would be
one nation again, lol.

Jesus_is_LORD said:
The Union and the Confederacy, or North and South, or Liberals and Progressives with the Independents getting Alaska, Hawaii, and the island territories.

Then they would go to war with each other (North vs South) and one would win and conquer the other and then it would be
one nation again, lol.
Click to expand...

You are probably right. We can't just seem to get along!

But I have thought about what you brought up.

I wonder how those two different countries would be.
The progressive country would be very flexible, gay marriage, trans-gender bathrooms, more regulations over business, more federal over-site of the states, perhaps free college,

So @Vincent the question then would be, which one of those two countries would you want to live in?
Me I would just pick Heaven instead, lol.

In my opinion, ideally, a government:

would be to protect the citizens from internal and external threats,
negotiate treaties with other nations.
make necessary laws to ensure rights of individuals are retained, not write laws to affect behavior changes.
actively guarantee and intervene when the rights of each citizen are violated and adjudicate when rights conflict with others.
ensure basic needs for everyone,
actively ensure maximum freedom for each citizen,
only allowed to voluntary tax such as sales or transaction tax and has a maximum debt ratio.
never restrict anyone's right to vote or redress the government.
never allow forced military service.
oversee immigration.
other important stuff I am forgetting. 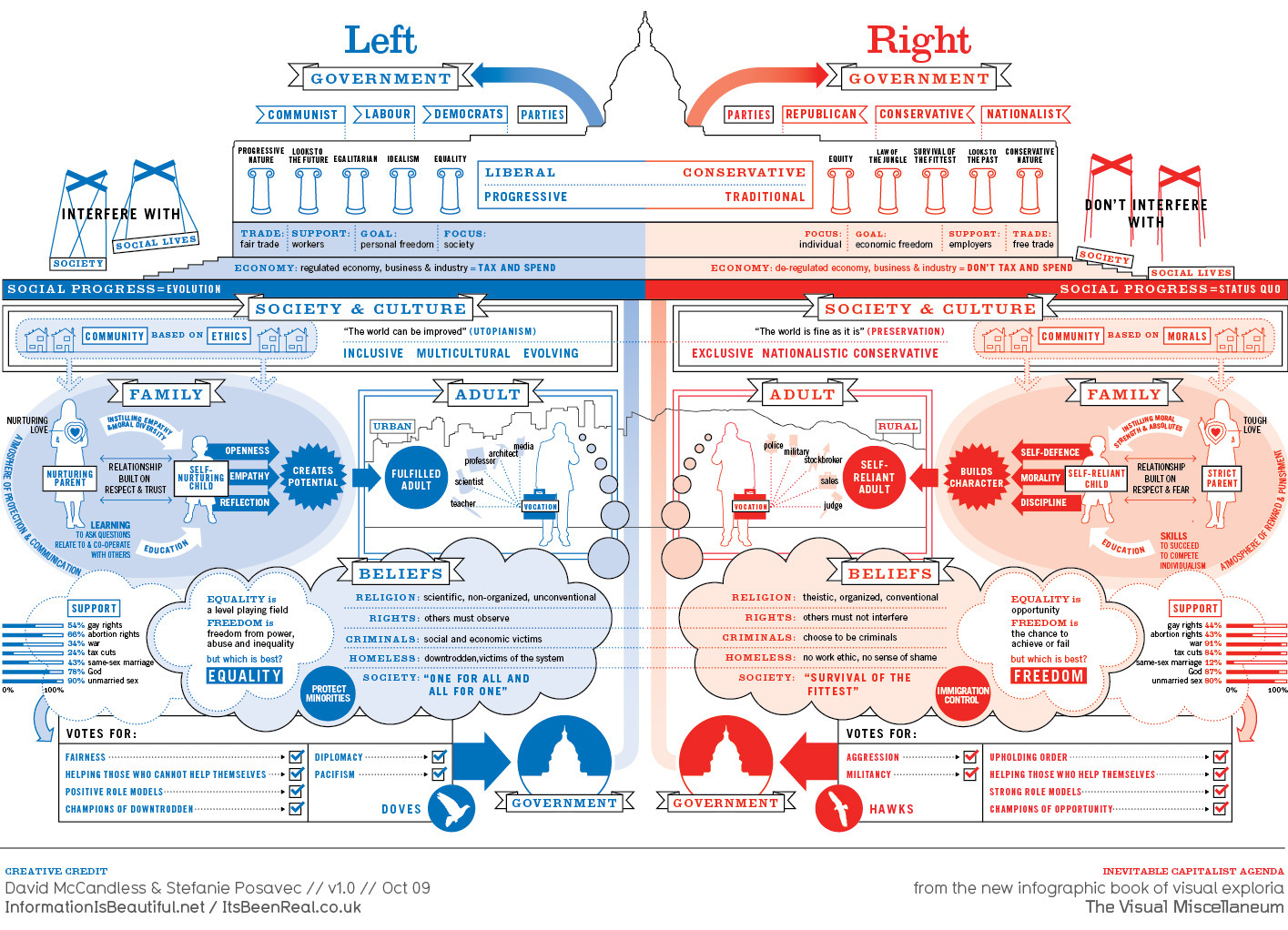 There would be input into the computer to tell it what was important and how to accomplish it. Those humans who input that info would be just as corrupt as the politicians, not to mention the hackers trying corrupt whatever systems put in place, then last of all, the law of entropy means that the computer would eventually break down and be unable to repair itself without the help of humans, those flawed humans with designs of making the world into their own. It is not viable alternative.

Seems biased toward the progressive. The Conservative is pretty stereotypical as portrayed by the media and progressives. I find the Inclusive label on the liberal side ironic. They are inclusive except when it comes to conservative ideas.


There is this one which may be more accurate, though it leans a big to the right.

You must log in or register to reply here.
Similar threads