One world government and religion - Revelation 13.

One of the most misunderstood little words in the bible is the word ALL. People also tend to disregard the words EARTH and WORLD. Also keep in mind that I look at this in the light of the two horned beast representing the Sunni and Shia sects of Islam, and ISLAM IS a worldwide religion.

Revelation 13 is a great chapter to show how the word ALL is used differently in scripture, and how the "experts" have misinterpreted it.

'Pas and holos' are the two most common words for ALL in the NT and they are used 7-8 different ways.

Verse 3 uses the word, 'holos', verses 7, 12, and 16 use the word 'pas'. It also uses the word ge for world which has a variety of meanings and often implies a region. Since the word the 'HOLOS' is used with 'ge' it 'could imply a region, but I suspect it implies the entire planet. HOLOS/ALL means ALL more than the many other words for ALL.

To show you how misleading some translations are look at how this one
Rev: 13:3b And I saw one of his heads as if it had been mortally wounded, and his deadly wound was healed. And ALL the world marveled (amazed) and followed the beast.

"Followed after the beast" is NOT in the original text. The KJV has this one right...

"And I saw one of his heads as it were wounded to death; and his deadly wound was healed: and all the world wondered after the beast."

The word ALL in verse 3 is 'holos' and unlike the word 'pas' it means EVERYTHING. If a man who was once dead from a literal and fatal head wound and were to 'resurface,' yes, the entire world would marvel (be amazed).

V.7 "And it was given unto him to make war with the saints, and to overcome them: and power was given him over ALL kindreds, and tongues, and nations."

In verse 7 the word 'pas' is used and it has a limited meaning of ALL.

FYI - In the interlinear, 'conquer' is used and translated overcome in the KJV, and 'power' is translated 'authority'.

The question now becomes "does this verse imply the beast will make war with and overcome all the saints on earth, and will he have authority over ALL kindreds, (tribes) tongues, (languages) and Nations? (people)"

Absolutely not! The verse implies that the beast only makes war with, and only overcomes the saints which he has power and authority over, (in his kingdom) NOT all the saints on the planet! This MAY have worldwide implications because the radical followers of the Islam (beast) already persecute and kill Christians. (more tan you think) In other words, he conquers - and has authority over those mentioned WITHIN his kingdom and possible those across the world esp. in Muslim dominated countries. This verse does NOT imply he's a global dictator ruling a one world government!

Another thing to note. The word POWER in verse 2 (devil's power) means strength,(ability in the interlinear) the word power in 7 and 12 means authority, the power of influence.

V.12 Speaking of the two horned beast. "And he exerciseth all the power of the first beast before him, and causeth the earth and them which dwell therein to worship the first beast, whose deadly wound was healed."

When the word ALL is used with the article, like it is in verse 12, it means the whole of one object. What is that object? The power/authority of the (Islamic) beast. NOT authority over all people on the entire earth.

ALL in verse 12 is 'pas', and it means 'each and individually'. What is verse 12 saying? He exercises ALL the authority of the 7 headed 10 horned beast and causes the earth - and THEM - Muslim's that dwell therein to worship the FIRST beast - the Mahdi. Looks like he will demand worldwide worship from Muslim's.

This DOES NOT imply that everyone on earth (all is not used) worships the beast. It does imply everyone - Muslim's - subject to and under the authority of the first (Islamic) beast. That means the Islamic false prophet will demand that all Muslim's worldwide worship the Mahdi.

V. 16 And he causeth all, both small and great, rich and poor, free and bond, to receive a mark in their right hand, or in their foreheads:

The KJV does no justice to verse 16. It omits the word THE 6 times.

Keep in mind that when the word ALL is used WITH the article like it should be in verse 16, and like it did in verse 12, it means "the whole of one object." So what is verse 16 saying? What is the object? The object is all those he 'causes' or are under the beasts' authority. He causes ALL (Muslim's) who (worship the beast, V.15) who are small or great - rich or poor - free - or slaves, to take the mark. NOT everyone on the entire planet!

Don't let the word ALL mislead you. Verse 16 doesn't imply the entire planet will receive a mark but only those under the authority of and within the kingdom of the false prophet.

The forehead and the right hand have significance in Islam. They wear turbans and their forehead repeatedly hits the mat. The harlot of Revelation 17 has Babylon the Great written on her forehead. Fanatical Muslim's like to show off their zebiba. And the mark may be as simple as having the zebiba, or wear a turban that has the Islamic symbol saying, "there is no god but Allah." or people must carry a Koran in their right hand....in order to buy or sell. Is it coincidence that according to Muslim scholars the Koran has 6,666 verses in it!

This is the mark.

What is a zebiba? The zebiba or 'raisin' is a patch of hardened skin that forms on the forehead of fanatical Muslims from their head repeatedly hitting the mat. A Muslim's forehead hits the mat at least 35 times a day in submission to Allah resulting in over a million prostrations in a lifetime. One strange coincidence is that according to two Islamic scholars, the Koran has 6, 666 verses in it. It may be required to carry in their right hand when purchasing or selling in the Mahdi's Caliphate. 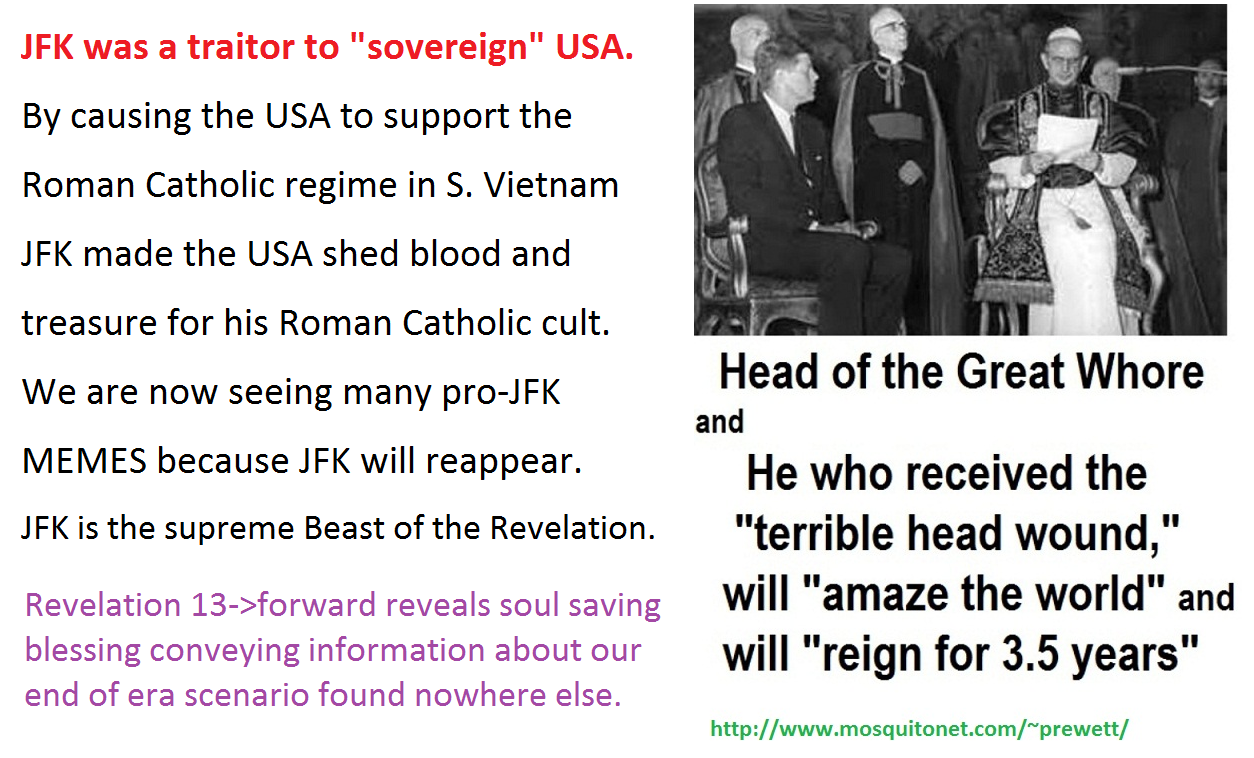 Yep! John Kennedy, Henry Kissinger and the Pope are going to amaze the world and fulfill Revelation 13.

The following verses are singled out of the Revelation to make this point:
The beast is a Satan powered king [therefore a man],
who has had a terrible head wound, has disappeared,
and will publicly reappear, and amaze the world.
Revelation chapter 13
13v1'....I saw a beast coming out of the sea...'
13v2'. ...dragon gave him his power...'
13V3'... .and I saw one of his heads as if it had been slain, and his fatal wound was healed.....'
13v7'....authority over every tribe and people. ....... was given him....
13V12'...and he [beast from earth] makes the earth and those who dwell in it to worship the first beast who had the wound of the sword and has come to life....'
Revelation chapter 17
17v3'. ..and I saw a woman sitting on a scarlet beast, full of blasphemous names, having 7 heads and 10 horns.....'
17v8'....the beast that you saw was and is not, and is about to come up out of the abyss and to go to destruction.
And those who dwell on the earth will wonder, whose name has not been written in the book of life from the foundation of the world, when they see the beast
that he WAS and IS NOT and WILL COME ....'
17v11'...and the beast that was and is not, is himself also an eighth [king] and is one of the seven...'
Based on detailed, unique, visible, verifiable
prophecy/Revelation fulfillment,
I assert/declare that the Vatican is the Great Harlot of the Revelation,

Therefore I further assert the beast is Roman Catholic.

Can you think of a world famous Roman Catholic who has had a
world famous terrible head wound under extremely mysterious circumstances?

I predict/prophecy in Jesus name that John F. Kennedy will
publicly reappear, amaze the world, take world power, and is in fact the beast of the Revelation.
This fulfillment will confirm the truth of the Revelation of Jesus Christ.
This fulfillment will confirm the truth of Jesus Christ the living Lord & Savior.
KISSINGER and 666 Note there are two beasts of
Revelation 13.
One from the sea.The other from the land.
One is a Gentile. The other is a Jew.
English is the world's single most widespread language:
A= 1 x 6 = 6, B = 2 x 6 = 12, C = 3 x 6 = 18, D = 4 x 6 = 24, E
= 5 x 6 = 30, etc.
K= 66
I= 54
S= 114
S= 114
I = 54
N= 84
G= 42
E= 30
R= 108
+ 666
Kissinger's name equates to '666' by a simple formula.
Kissinger is Jewish
Kissinger is Papal adviser and premier "world statesman'
Kissinger documented evil NWOrder leader
So: Re- Vatican, JFK, and KISSINGER
The question becomes-
Would Jesus Christ allow such literal fulfillment to occur coincidentally?
I say NO, Jesus would not.
Therefore I am COMPELLED to believe that it is prophecy fulfillment in progress.
The confirmation of my contention will be the public and literal reappearance of JFK
who will take world power with Kissinger at his side.
I urge anyone to personally study and heed the entire Revelation.
Early in the Revelation of Jesus Christ, God promises to bless anyone who reads or hears the Revelation and heeds it.
'...for the time is near'...'
'....and the whole earth was amazed and followed after the
beast...'
wait and see....
Call on Jesus Read and HEED His Revelation!
The Lord once said, 'Surely, just as I have intended, so it has happened, and just as I have planned, so it will stand......'
Isaiah 14:24 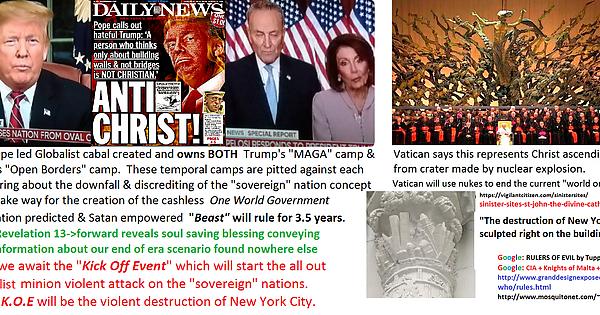 1610 views on Imgur: The magic of the Internet

www.cwporter.com
You must log in or register to reply here.
Similar threads