Staff Member
O send out Thy light and Thy truth
Psalm 43:3

The Yazidis are a Curdish religious group who are being persecuted by Iraq. There were at least 5000 massacred last year

The Yazidis are not Christian. They follow a stange religion and worship a peacock angel. This persecuted group of people need our prayers that the truth of the gospel of Jesus Christ, the only true Lord and Saviour will reach them

The Yazidis are monotheists who believe in a benevolent peacock angel (Melek Taus) and whose ancient gnostic faith has elements of Zoroastrianism, Christianity and Islam. The Islamic State of Iraq and the Levant and other extremists tend to view the peacock angel as the malevolent archangel lucifer or satan and label the Yazidis as 'devil worshippers
(Wikipedia)

Terrible ISIS brutality against the Yazidis in the report below

IRAQ – A nine-year-old Yazidi girl has been impregnated after being raped by at least ten members of the barbaric Islamic group ISIS, which identifies itself as the Islamic State of Iraq and Syria, according to aid workers in the region.

“This girl is so young she could die if she delivers a baby,” Yousif Daoud, a Canadian-based aid worker who has been working in Iraq, told the AFP. “Even a caesarian section is dangerous. The abuse she has suffered left her mentally and physically traumatized.”

He said that the girl, whose identity remains concealed, “was sexually abused by no fewer than 10 men.”

“Most of them were front-line fighters or suicide bombers who are given girls as a reward,” Daoud explained. “She was in very bad shape.”

The child was among the 200 Yazidis that were released earlier this month after being held by ISIS since last August. Mostly women and children were freed, as well as the elderly.

A Kurdish aid group took the pregnant girl to Germany following her release, and she is currently being cared for by a medical charity.

“If she survives the ordeal, her outlook will be better than that of dozens of other pregnant, traumatized Yazidi women,” The Star reports. “Unless Canada or other Western countries are willing to accept them quickly as refugees—and allow their babies to be adopted—aid workers say, the militants’ jihad will reach into another generation.”

Daoud told the outlet that some Yazidis who are impregnated by ISIS seek abortions.

“If they are married, their husbands won’t take them back if they are pregnant. And it’s clear that the babies will never be accepted,” he explained. “I don’t know what the future would be for their babies. The girls and women don’t want them. They have suffered so much they just want to forget.”

An 18-year-old Yazidi girl simply identified as Hannan (not her real name) told the BBC in December that many girls are taken as sex slaves after being captured by ISIS. She herself had been captured, but later escaped.

“They said: ‘Yazidis are infidels. Now you will live as Muslims,'” Hannan recalled. “They took many girls for sex. They told us, ‘Forget the life you knew. … If you do not follow Islam, we will kill all of you.'”

Christians, Catholics and Yazidis alike have been targeted by ISIS for capture, with thousands believed to have been taken since last year.

Yazidis worship the Melek Tawwus, or the Peacock Angel, who they believe was an angel who fell with Satan at the rebellion, but was later forgiven and returned to Heaven. They believe that the Melek Tawwus helped create the universe, and when he descended to earth, he took the form of a peacock. The angel then purportedly transferred his array of colors to the earth.

In the Yazidi religion, when a person dies, they appear before Sheikh Adi—an 11th century Sufi—where they are questioned about their marital and sexual lives. If they are approved, they are allowed to enter into paradise. However, Yazidis also believe that a person may reincarnate until they reach a level of purity. 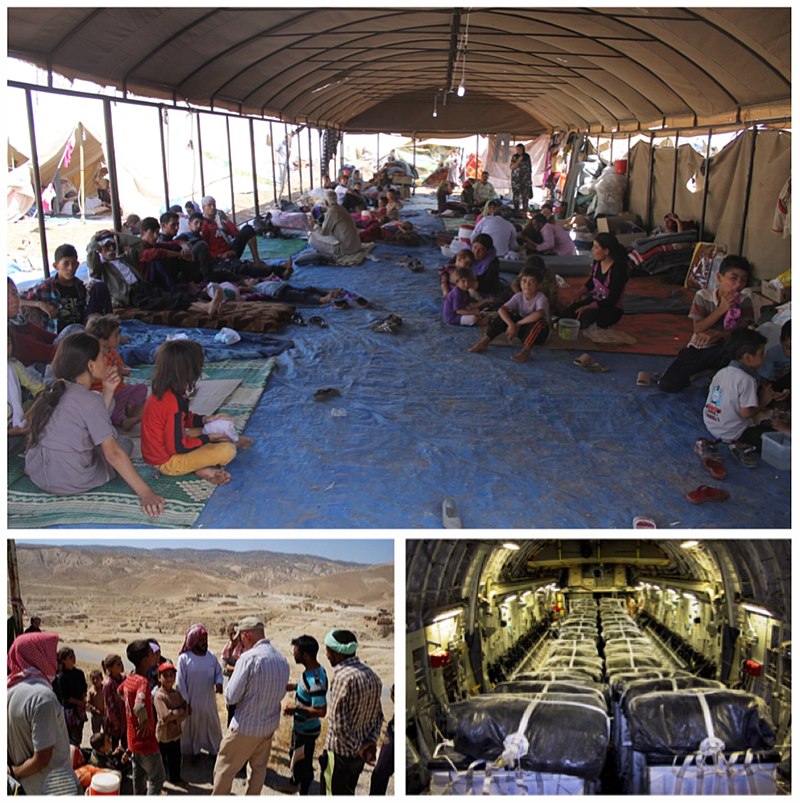 Source of Picture: Wikipedia
"Persecution of Yazidis by the Islamic State" by Zfigueroa - Own work. Licensed under CC BY-SA 4.0 via Wikimedia Commons

Anyone who considers rape a bonus from God, is so twisted in their minds, they have completely lost touch with reality.
K

Brad Huber said:
Anyone who considers rape a bonus from God, is so twisted in their minds, they have completely lost touch with reality.
Click to expand...

We must pray for them the most. The Girl is held in Christs Loving arms but rapist believing he is doing evil for good is truly under the control of the evil one.
You must log in or register to reply here.
Share:
Facebook Twitter Reddit WhatsApp Email Link
Top