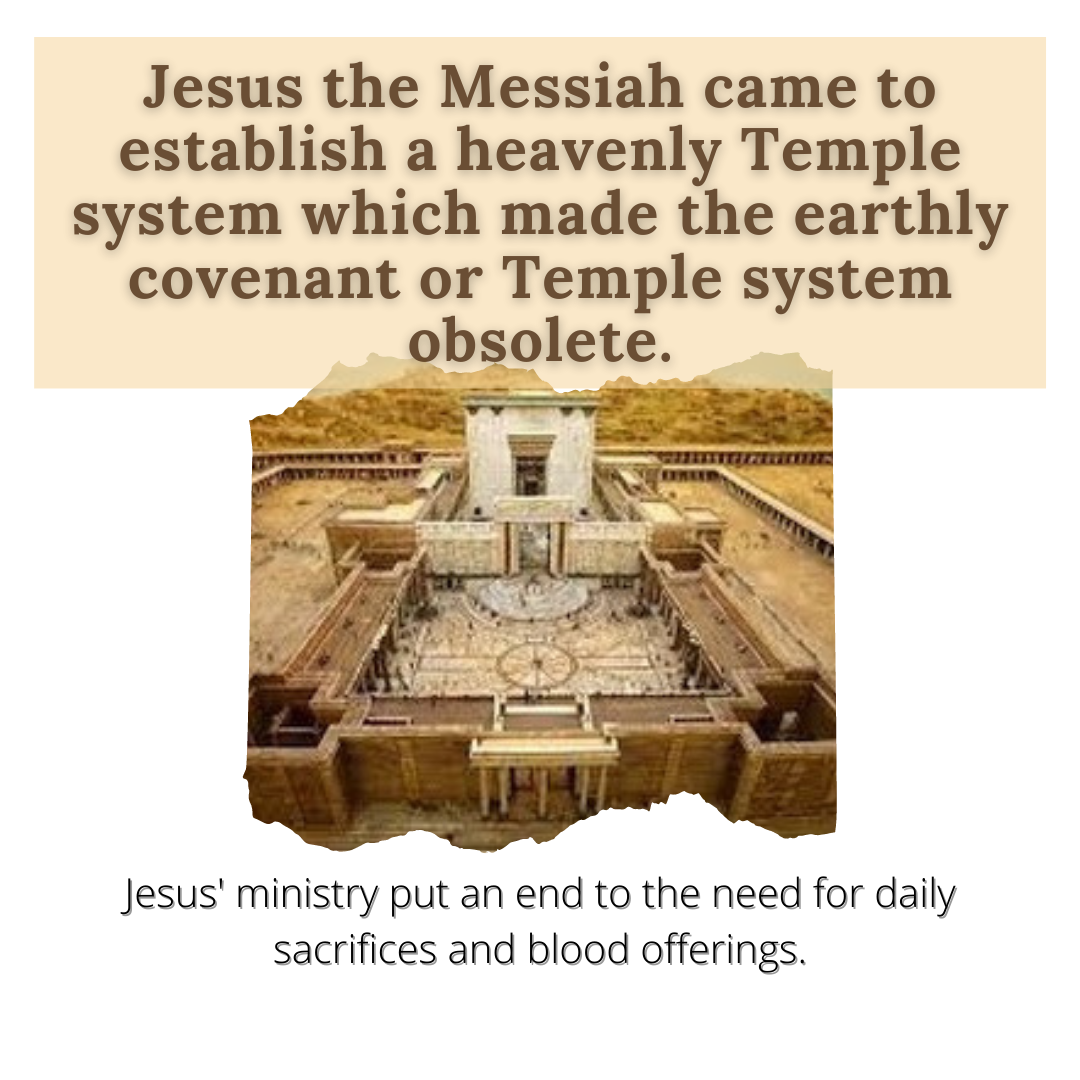 Because the earthly Temple system has been destroyed and they have rejected Jesus’ interpretation and teachings, the Jewish people cannot be made righteous.

In Ezekiel 46, the prophet envisions a Prince who follows through with all of the rules, statutes and regulations of the Temple sacrifice system. This Prince is the Messiah whom the Jewish people also believe will come and rebuild the Temple so that the people can atone for their sins once again through sacrifices and offerings. However, they believe the Temple will be a physical one, made with human hands. Paul states otherwise.

Acts 17:24 – The God who made the world and everything in it is the Lord of heaven and earth and does not live in temples built by human hands.

The Temple was rebuilt through Jesus. He is the Temple, the Prince and Messiah. He has already fulfilled all of these scriptures and the Apostle Paul explains this further.

Hebrews 8:1-13 – Now the main point of what we are saying is this: We do have such a high priest, who sat down at the right hand of the throne of the Majesty in heaven, 2 and who serves in the sanctuary, the true tabernacle set up by the Lord, not by a mere human being.

3 Every high priest is appointed to offer both gifts and sacrifices, and so it was necessary for this one also to have something to offer. 4 If he were on earth, he would not be a priest, for there are already priests who offer the gifts prescribed by the law. 5 They serve at a sanctuary that is a copy and shadow of what is in heaven. This is why Moses was warned when he was about to build the tabernacle: “See to it that you make everything according to the pattern shown you on the mountain.” 6 But in fact the ministry Jesus has received is as superior to theirs as the covenant of which he is mediator is superior to the old one, since the new covenant is established on better promises.

7 For if there had been nothing wrong with that first covenant, no place would have been sought for another. 8 But God found fault with the people and said:

9 It will not be like the covenant I made with their ancestors when I took them by the hand to lead them out of Egypt, because they did not remain faithful to my covenant, and I turned away from them, declares the Lord. 10 This is the covenant I will establish with the people of Israel after that time, declares the Lord. I will put my laws in their minds and write them on their hearts. I will be their God, and they will be my people.

11 No longer will they teach their neighbor, or say to one another, ‘Know the Lord,’ because they will all know me, from the least of them to the greatest. 12 For I will forgive their wickedness and will remember their sins no more.” 13 By calling this covenant “new,” he has made the first one obsolete; and what is obsolete and outdated will soon disappear.
S

Yes, the death, burial and bodily resurrection of Jesus Christ -- He became the Lamb of God. Did away with the Old Testament need for yearly sacrifice of animals.
A

Sue D. said:
Yes, the death, burial and bodily resurrection of Jesus Christ -- He became the Lamb of God. Did away with the Old Testament need for yearly sacrifice of animals.
Click to expand...

Agreed!!
You must log in or register to reply here.
Similar threads