Lemongrass – An Aromatic Healer
Cymbopogon citratus also known as Lemongrass is an herb which belongs to the grass family of Poaceae. It is well known and utilized for its distinct lemon flavor and citrusy aroma. Lemongrass is a tall, perennial grass which is native to India and tropical regions of Asia. It is a coarse and tufted plant with linear leaves that grows in thick bunches, emerging from a strong base and standing for about 3 meters in height with a meter-wide stretch.

In addition to its culinary usage, lemongrass offers a wide array of medicinal benefits and is in extensive demand due to its antibacterial, anti-fungal and antimicrobial properties across Southeast Asia, as well as the African and American continents.

The genus Cymbopogon comprises of 55 species of grass, two of which are referred to as Lemongrass. These are West Indian lemongrass or Cymbopogon citratus which is famously preferred for culinary use and East Indian lemongrass or Cymobopogon flexuosus which is used in the manufacturing of various products such as fragrances because of its extended shelf life, owing to the low amount of myrcene in that variety.

Nutritional Value of Lemongrass
Lemongrass is an aromatic storehouse of essential nutrients providing a wide array of health benefits. It is a source of essential vitamins such as vitamin A, B1 (thiamine), B2 (riboflavin), B3 (niacin) B5 (pantothenic acid), B6 (pyridoxine), folate and vitamin C. It also provides essentil minerals such as potassium, calcium, magnesium, phosphorous, manganese, copper, zinc and iron, which are required for the healthy functioning of the human body. It offers no harmful cholesterol or fats.

Health Benefits of Lemongrass
Lemongrass contains antioxidants, flavonoids and phenolic compounds such as luteolin, glycosides, quercetin, kaempferol, elimicin, catecol, chlorogenic acid, and caffeic acid, all of which help in providing an impressive range of medicinal aids. The main component of lemongrass is lemonal or citral, which has anti-fungal and antimicrobial qualities, while also providing a distinct lemony smell. Some of the most well known health benefits of lemongrass include:

Cholesterol: Lemongrass possesses anti-hyperlipidemic and anti-hypercholesterolemic properties that support healthy cholesterol levels. Studies have shown that the regular consumption of lemongrass has shown significant results in sustaining healthy levels of triglycerides and reducing the LDL cholesterol in the body. This helps in preventing the accumulation of lipids in the blood vessels and promotes the unobstructed flow of blood in the arteries and prevents various cardiac disorders such as atherosclerosis.

Detoxification: Lemongrass helps in cleansing and flushing harmful toxic wastes out of the body, as a result of its diuretic properties. Detoxification helps in better regulation of various organs of the body, including the liver and kidney, while also helping to lower the levels of uric acid. The diuretic effect of lemongrass helps in increasing the quantity and frequency of urination, which helps in maintaining digestive health, eliminating accrued fats, and assisting in maintaining a clean system. 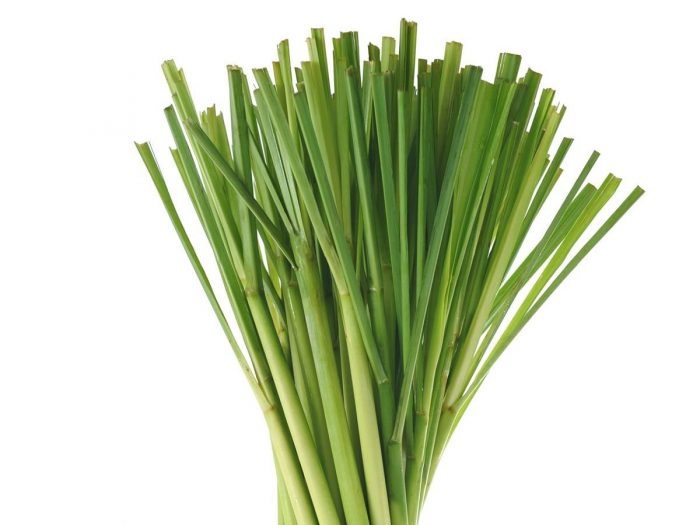 [/inlet]Cancer: Lemongrass is effective in treating various types of cancers without affecting the healthy normal cells of the body. Research conducted to prove the anti-cancerous activity of lemongrass has shown promising outcomes in the prevention of skin cancer. Studies have shown that a certain component, citral, which is present in lemongrass, helps in inhibiting the growth of hepatic cancer cells during the initial phases and prevents any further production of cancerous cells. Another study has provided supporting evidence regarding the anti-proliferative effect of citral in impeding the growth of human breast cancer cells and the induction of apoptosis.

Staphylococcus aureus: Studies have shown that lemongrass essential oil has an anti-biofilm capacity and is beneficial against the infection caused by Staphylococcus aureus. Lemongrass contains phenols which possess the capability to spread quickly through the body tissues and cure biofilms located anywhere in the body. Lemongrass disrupts the growth and communication of germs which helps in inhibiting the formation of biofilms. The essential oil of lemongrass is useful for application both topically as well as internally in the diseases diagnosed with biofilms, such as Lyme disease.

Stomach Disorders: Studies have shown that lemongrass essential oil has anti-microbial and anti-bacterial properties which help in fighting the infections caused by various pathogens such as Helicobacter pylori and Escherichia coli. Lemongrass is beneficial in the prevention of gastrointestinal disorders such as gastric ulcers, helps in stimulating the bowel function, and improves digestion. The anti-inflammatory properties of lemongrass are beneficial for treating constipation, ulcerative colitis, diarrhea, nausea and stomach aches.

Insomnia: Lemongrass aids in calming the muscles and nerves which helps in inducing deep sleep. Research has shown that lemongrass tea has sedative and hypnotic properties which help in increasing the duration and quality of sleep.

Respiratory Disorders: Lemongrass is widely used in Ayurvedic medicine for its healing effects in treating coughs and colds. Along with other beneficial components, the vitamin C content present in lemongrass helps in providing relief from nasal blockages, flu and other respiratory disorders such as bronchial asthma.

Fever: Lemongrass is a febrifuge and is also known as the ‘fever grass’, owing to its beneficial effects in lowering fevers. The anti-pyretic and diaphoretic effect of lemongrass is extensively used in Ayurvedic medicine for curing fevers by inducing sweating.

Infections: Lemongrass works as an antiseptic and is effective in treating infections such as ringworm, sores, Athlete’s Foot, scabies, and urinary tract infections because of its antimicrobial and anti-fungal properties. Studies have shown that lemongrass exerts healing effects on dermatological infections, such as yeast infections, by inhibiting the growth of pathogens. Another study provided supporting evidence that demonstrated the efficacy of lemongrass over thyme, patchouli and cedar wood oil in the treatment of various diseases such as oral or vaginal candidias.

Aches: Lemongrass helps in alleviating the pain and discomfort caused by headaches and migraines due to its analgesic properties. The phytonutrients present in lemongrass improve the blood circulation and help in relieving spasms, muscle cramps, sprains, and back aches. Lemongrass is valuable in treating sports wounds, including dislocations, internal injuries and bruises.

Nervous System: Lemongrass is a nervine and has been proven to be an excellent tonic for the nervous system. It stimulates the mind and helps in combating convulsions, nervousness, vertigo and various neuronal disorders such as Alzheimer’s and Parkinson’s disease. Lemongrass is used in therapeutic baths, which assist in calming the nerves and help in alleviating the symptoms of anxiety and fatigue caused by stress.

Type-2 Diabetes: Lemongrass has been proven beneficial in treating Type-2 diabetes. Studies have shown that the citral present in lemongrass helps to maintain optimum levels of insulin and improves the tolerance of glucose in the body.

Rheumatism: Lemongrass is effective in relieving the pain and discomfort caused by rheumatism. It can be applied topically on both lumbago and sprains and helps in relieving neuralgia and other painful sufferings.

Immune System: Lemongrass helps in restoring the vital systems which are operational in the body, including digestion, respiration, excretion and nervous system. This assists in better absorption of nutrients and strengthens the immune defense mechanism of the body. Lemongrass extracts have a beneficial effect on the inflammatory actions of cytokines, which are the signaling molecules through which the cells communicate and respond in the body. Studies have shown that lemongrass exerts anti-inflammatory action and its constituents such as citral may be the cause behind its inhibitory effects on cytokine production.

Skin Care: Lemongrass has been treasured as a skin tonic and makes an effective cleanser for oily or acne-prone skin, due to its astringent and antiseptic qualities. It helps in strengthening the skin tissues and toning up the pores while also sterilizing them. Care should be taken while using lemongrass products, as the undiluted application might lead to dermal irritation in some cases.

Cellular Health: Lemongrass possesses antioxidant qualities and help in protecting the body cells from the oxygen-derived free radicals. It also helps in the cleansing of blood and strengthens the spleen to discard the tarnished red blood cells. It supports the function of the thymus glands which helps to produce white blood cells. Lemongrass helps in stimulating regeneration of cells. The folate and potassium content in the stem and leaves of lemongrass aids in DNA synthesis and promotes cell division.

Edema: Lemongrass is effective in curing the condition of water retention or edema. It has a cleansing effect on lymphatic congestion and helps to soothe the swelling.

Aromatherapy: Lemongrass consists of the beneficial ingredients of essential oils such as nerol, citronellol, myrcene, dipentene, geraniol and methyl heptenone which possess anti-fungal, insecticidal and antiseptic properties. Lemongrass oil is extensively used in aromatherapy, due to its therapeutic effects, which help in revitalizing and refreshing the body. The cooling effect of lemongrass oil is beneficial for the body during hot weather and promotes the revival of both the mind and soul. Lemongrass oil possesses natural astringent and toning qualities which help in stimulating blood circulation and tones up the dermal tissues. It also helps in tightening, uplifting and firming lethargic or sagging skin. 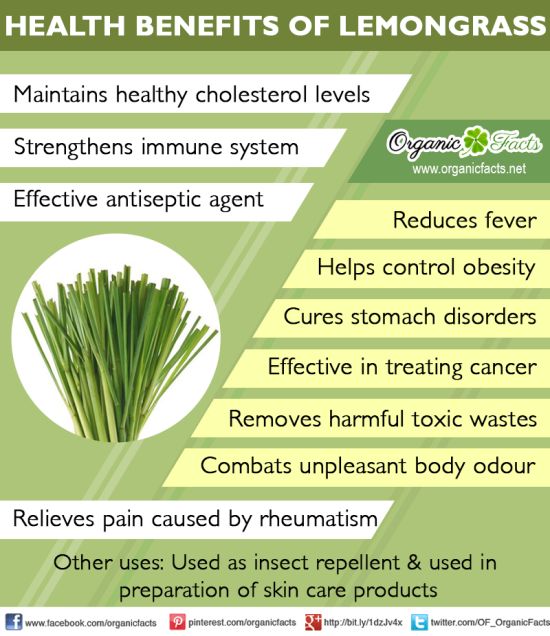 Obesity: Lemongrass contains citral, which has been proven to be effective in combating obesity. It prevents the accumulation of abdominal fat and promotes the use of stored energy, which helps in preventing diet-induced weight gain. It aids in healthy metabolism and enhances the oxidation of fatty acids in the body.

Body Odor: Lemongrass is used in the manufacturing of deodorants due to its cleansing and antibacterial properties which help to combat unpleasant body odor and prevent fungal and bacterial infections. It can also be added to foot baths to for sanitizing sore and odorous feet.

Insect Repellant: Lemongrass is used as a natural insect repellant and helps in preventing the occurrence of insect-borne diseases such as malaria, dengue and Lyme disease. Studies have provided supporting evidence regarding the anti-malarial and anti-protozoan properties of lemongrass, which makes lemongrass oil an effective ingredient in mosquito repellants.

Culinary Usage: Apart from folk medicines, lemongrass is commonly used in Asian cuisines, especially those of Vietnam, Thailand, and Malaysia. It is used for adding flavor to beverages such as teas, curries and soups, and also finds extensive use in the preparation of pudding, meat products, candies and baked goods.

Other Uses of Lemongrass
Lemongrass is used in the manufacturing of perfumes, deodorants, polishes, candles and waxes. It is also used to add fragrance to soaps and cosmetic products.

Lemongrass is used to lure and attract honey bees for various commercial purposes.

Hydrophobic Properties: Lemongrass is used for preserving ancient palm leaf manuscripts and protects them from the damage caused by microorganisms. It strengthens the leaves by providing the required moisture to the fragile palm leaves without letting the humidity cause any loss to the stored text. This protective effect can be attributed to the hydrophobic properties of lemongrass oil.

Pet Products: Lemongrass is used in the manufacturing of shampoos and grooming products for pets due to its repellant effects on lice and ticks.

Lemongrass: A Word of Caution
Side Effects

Undiluted or concentrated lemongrass oil should not be applied directly on the body as it may result in harmful reactions. It is always advisable to keep pure lemongrass oil out of the reach of children.

It is strongly recommended to consult a health professional before considering lemongrass oil for therapeutic usage during special conditions such as pregnancy, when trying to conceive, breastfeeding, and during the course of any ongoing medical treatments.

Lemongrass has galactagogic properties, which promote the formation of milk in the breasts. It is also effective in stimulating the menstrual flow and helps in soothing menstrual cramps and discomfort. Lemongrass helps in soothing the swelling and is effectual in the conditions of varicosity. Used cautiously, lemongrass can prove extremely valuable in providing a range of medicinal relief!

Add a refreshing and healthy aroma to your lifestyle with lemongrass!