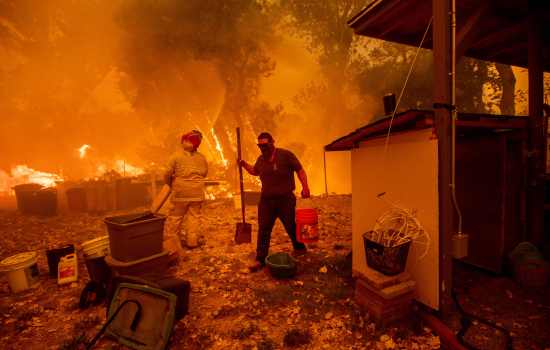 Resident Lane Lawder carries a water bucket while fighting to save his home from the Ranch Fire burning down New Long Valley Rd near Clearlake Oaks, California, on Saturday, August 4, 2018. The Ranch Fire is part of the Mendocino Complex, which is made up of two blazes, the River Fire and the Ranch Fire. (Noah Berger/AFP/Getty Images)

California’s traditional fire season is not yet half over, but on Monday an army of more than 14,000 firefighters battled 16 major blazes around the state — fires that already have destroyed more than 2,000 homes and killed nine people.

And one ominous record was broken.

By Monday evening, the Mendocino Complex Fire, burning mostly in grasslands around Clear Lake in Lake, Colusa and Mendocino counties, had charred 283,800 acres — an area larger than the cities of San Jose, San Francisco, Oakland and Sacramento combined — making it the largest wildfire in recorded California history.

Fire officials said that blaze, which nearly doubled in size over the weekend and had destroyed 75 homes, surpassed the Thomas Fire, which burned 281,893 acres in December in Santa Barbara and Ventura counties, destroying 1,063 structures and killing one person.

“Fire conditions across the state continue to be extremely active,” said Scott McLean, a spokesman for Cal Fire, the state’s firefighting agency.

“I live in Chico, a significant distance away from the Mendocino Complex Fire and about an hour south of the Carr Fire,” he added. “Nothing but ash all over my vehicles each day.”

The Carr Fire, which leveled neighborhoods on the western edge of Redding last month, destroying 1,080 homes and killing seven people, is now mostly burning in rural areas west of Shasta Lake. The blaze started July 23 when a trailer had a flat tire and its rim scraped the pavement. By Monday, it had charred 163,207 acres and was 45 percent contained.

A firefighting aircraft drops fire retardant ahead of the River Fire as it burns through a canyon on August 1, 2018 in Lakeport, California. (Photo by Justin Sullivan/Getty Images)

Temperatures were forecast to reach 95 degrees in downtown Los Angeles and up to 108 degrees in the San Fernando Valley. Forecasters said the high temperatures, very low humidity and gusty winds up to 50 miles an hour would create extreme fire risk for the mountain areas around Southern California, including the Los Padres National Forest and Angeles National Forest.

Scott Stephens, a professor of fire science at UC Berkeley, said this year’s bad fire summer is caused by dead brush and other vegetation left over from the five-year drought, more people moving into rural areas, and warmer temperatures from climate change. Typically, fire season runs through late October, he noted.

“I don’t see a lot of reasons why we won’t continue to have more big fires that will spread,” he said.

Not all the news was bad.

Firefighters gained ground on several large fires Monday. Evacuation orders were lifted to allow residents to return to the community of Wawona, at Yosemite National Park.

Nearby, Yosemite’s fabled Mariposa Grove of giant sequoias was declared out of harm’s way as crews continued to build fire lines.

Late Sunday, national parks officials announced that much of the park would be closed indefinitely, including Yosemite Valley, Wawona, Glacier Point and Hetch Hetchy. Only the Tioga Road and high country near Tuolumne Meadows remains open, a crushing blow to the economy of the rural communities surrounding the park during the peak of summer tourist season.

A burnt out boat sits at a marina on Whiskeytown Lake after damage from the Carr fire near Redding, California, on July 30, 2018.

Scott Gediman, a spokesman for Yosemite, said only about 40 parks employees remained, down from a normal total of 700 this time of year. They are law enforcement officers, utility experts who are needed to keep wastewater plants and power lines operating properly, and other key personnel, he said.

Smoke levels in Yosemite Valley have exceeded hazardous levels, visibility is severely limited, and fire trucks have regularly blocked Highway 41, 140 and 120, the main roads into the park. Many of the park’s employees, including planners, payroll staff and others are working from Mariposa, an hour away, or from home.

“It’s day-to-day situation,” Gediman said. “We want to get it open as soon as we can. But our paramount concern is health and safety of the visitors and employees.”

The fire that has threatened Yosemite, dubbed the Ferguson Fire, caused the park’s closure on July 25. On Monday, it had burned 91,502 acres and was 38 percent contained. Gediman said that the most famous features of Yosemite are not threatened even though flames have burned several hundred acres inside the park near the El Portal entrance on Highway 140.

“We don’t feel the iconic sites in Yosemite Valley — Half Dome, El Capitan or any of the structures — are in imminent risk,” he said. “It’s still about six miles from the developed part of Yosemite Valley.”

But a new fire that broke out to the north, along Highway 108 at the Sonora Pass north of Yosemite, burned a famous Sierra landmark.

The Dardanelle Resort near Sonora Pass was destroyed Sunday by the Donnell Fire, which began Wednesday and by Monday had grown to more than 11,000 acres with just 2 percent containment.

“It has been confirmed that there is ‘massive structural damage,’ ” the owners of the resort wrote on Facebook. “We are heartbroken and struggling with this news. The outpouring of love and support from the community has been incredible.”

The resort, a compound of cabins, a motel and RV sites, opened in 1923 and is located at an elevation of about 5,700 feet, 51 miles east of Sonora. Because there are so many big fires burning around the state, officials at the U.S. Forest Service said on the fire’s web page that “firefighters and equipment are extremely scarce. Hand crews, engines, and equipment have been ordered and are pending.”

Smoke across the state led to air quality advisories in the Sierra and Central Valley. The Bay Area Air Quality Management District also extended an air quality advisory through Thursday, urging people who smell smoke to stay inside with windows and doors closed and set air conditioning systems in their homes and cars to re-circulate to prevent outside air from moving inside.

I was unaware of this

Isn't that where they are growing a lot of marijuana farms.