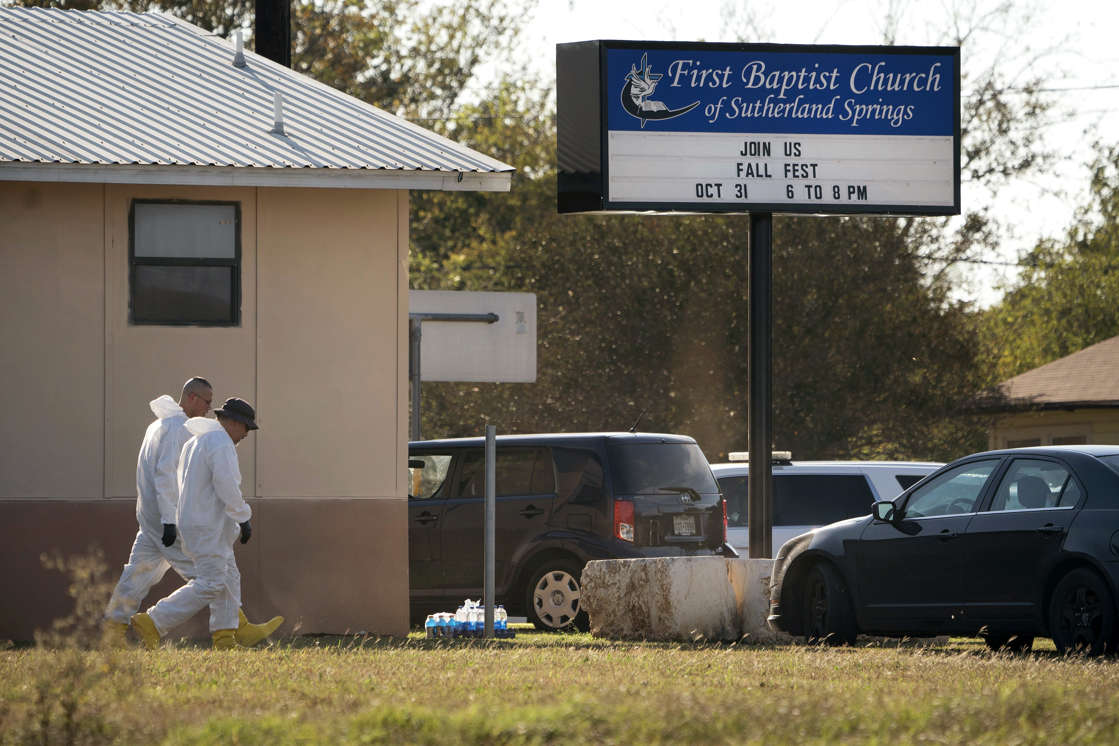 SUTHERLAND SPRINGS, Texas — A man opened fire inside of a church in a small South Texas community on Sunday, killing 26 people and wounding about 20 others in the deadliest mass shooting in the state's history, the governor said.

Officials didn't identify the attacker during a news conference Sunday night, but two other officials — one a U.S. official and one in law enforcement — who were briefed on the investigation identified him as Devin Kelley. They spoke to the AP on the condition of anonymity because they weren't authorized to discuss the investigation.

The U.S. official said Kelley lived in a San Antonio suburb and doesn't appear to be linked to organized terrorist groups. The official said investigators are looking at social media posts Kelley may have made in the days before Sunday's attack, including one that appeared to show an AR-15 semiautomatic weapon.

Authorities said civilian with a gun confronted the attacker and chased him away. The gunman was later found dead in his vehicle.

A Department of Public Safety official said at the news conference that investigators weren't ready to discuss a possible motive for the attack. He said the dead ranged in age from 5 to 72 years old. Twenty-three were found dead in the church, two were found outside and one died after being taken to a hospital.

Federal law enforcement swarmed the small community 30 miles southeast of San Antonio after the attack to offer assistance, including ATF investigators and members of the FBI's evidence collection team.

Among those killed was the 14-year-old daughter of the church's pastor, Frank Pomeroy, and his wife, Sherri. Sherri Pomeroy wrote in a text message to the AP that she and her husband were out of town in two different states when the attack occurred.

"We lost our 14 year old daughter today and many friends," she wrote. "Neither of us have made it back into town yet to personally see the devastation. I am at the charlotte airport trying to get home as soon as i can."

The wounded were taken to hospitals. Video on KSAT television showed first responders taking a stretcher from the church to a waiting AirLife helicopter. Eight victims were taken by medical helicopter to the Brooke Army Medical Center, the military hospital said.


Megan Posey, a spokeswoman for Connally Memorial Medical Center, which is in Floresville and about 10 miles from the church, said "multiple" victims were being treated for gunshot wounds. She declined to give a specific number but said it was less than a dozen.

Alena Berlanga, a Floresville resident who was monitoring the chaos on a police scanner and in Facebook community groups, said everyone knows everyone in the sparsely populated county.

"This is horrific for our tiny little tight-knit town," said Alena Berlanga. "Everybody's going to be affected and everybody knows someone who's affected," she said.

Regina Rodriguez arrived at the church a couple of hours after the shooting and walked up to the police barricade. She hugged a person she was with. She had been at an amusement park with her children when she heard of the shooting.

She said her father, 51-year-old Richard Rodriguez, attends the church every Sunday, and she hadn't been able to reach him. She said she feared the worst.

Nick Uhlig, 34, is a church member who didn't go Sunday morning because he was out late Saturday night. He said his cousins were at the church and that his family was told at least one of them, a woman with three children and pregnant with another, is among the dead. He said he hadn't heard specific news about the other.

"We just gathered to bury their grandfather on Thursday," he said. "This is the only church here. We have Bible study, men's Bible study, vacation Bible school."

"Somebody went in and started shooting," he said, shaking his head and taking a long drag of his cigarette.

President Donald Trump tweeted from Japan, where is his on an Asian trip, that he was monitoring the situation. Texas Gov. Greg Abbott called the shooting an "evil act," and promised "more details" from the state's Department of Public Safety soon.

Sutherland Springs is in a rural area where communities are small and tight-knit. The area is known for its annual peanut festival in Floresville, which was most recently held last month.

"We're shocked. Shocked and dismayed," said state Sen. Judith Zaffirini, a Laredo Democrat whose district includes Sutherland Springs. "It's especially shocking when it's such a small, serene area. These rural areas, they are so beautiful and so loving."

Zaffirini said she had called several county and local officials but not been able to get through and didn't have any firm details.

The church is a white, wood-framed building with a double-door at the entrance and a Texas flag on a pole at the front area. A morning worship service was scheduled for 11 a.m. The first news reports of the shooting were between noon and 12:30 p.m.

The church has posted videos of its Sunday services on a YouTube channel, raising the possibility that the shooting was captured on video.

In the most recent service, posted Oct. 29, Frank Pomeroy parked a motorcycle in front of his lectern and used it as a metaphor in his sermon for having faith in forces that can't be seen, whether it be gravity or God.

"I don't look at the moment, I look at where I'm going and look at what's out there ahead of me," Pomeroy said. "I'm choosing to trust in the centripetal forces and the things of God he's put around me."

Despite the tragedy, at least they can look forward to meeting again in heaven. Praying for those affected.

On September 24th of this year there was another deadly church shooting, just 4 miles from where my husband and I live:
Deadly Tennessee church shooting: Sudanese immigrant arrested, FBI launches civil rights investigation

Two years ago there was one in Charleston, SC, where some of my family lives. So, these two have been pretty close to home for us.

Another horrible tragedy in our lifetime. I am not a die hard end times person nor do I deny it is happening in our time. While we exist , I don't think gun control is the answer. I am not saying we need more responsible people armed to deal with these evil people among us but I don't discount it either! I pray to God for the correct answers to this mayhem!

Brad Huber said:
Despite the tragedy, at least they can look forward to meeting again in heaven. Praying for those affected.
Click to expand...

That was the same thought I had when I first heard about this tragedy. I can't imagine losing a good portion of my church family in such a manner during a Sunday service, but thank God for the ones who knew they were saved.

Laura1557 said:
That was the same thought I had when I first heard about this tragedy. I can't imagine losing a good portion of my church family in such a manner during a Sunday service, but thank God for the ones who knew they were saved.
Click to expand...

In perspective of time and space, we are only here for a blink of an eye! 1 John 5:13 These things I have written to you who believe in the name of the Son of God, so that you may know that you have eternal life.
You must log in or register to reply here.
Share:
Facebook Twitter Reddit WhatsApp Email Link
Top